We do not offer entertainment at The Oasis. We consciously avoid it. There is no TV, radio or telephone in the rooms. Our main focus is peace and quiet, relaxation and an informal atmosphere. If you want to relax between or after the dives, you can do this at the beautiful pool with a superb sea view. Sunbeds, umbrellas and towels are available free of charge. 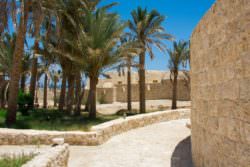 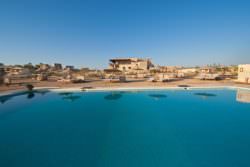 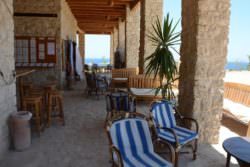 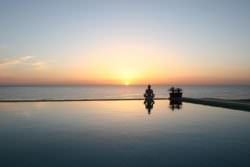 Get pampered with a massage at the massage center or directly at the pool (additional costs apply) In addition to the classic massages we also offer reflexology.  More information can be found in the pdf file. 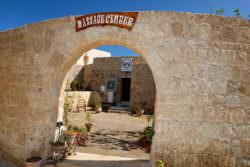 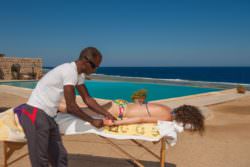 Next to the diving center you have the opportunity to buy some typical souvenirs and spices as well as items for your personal hygiene. 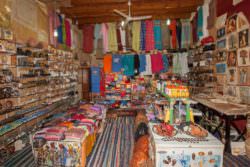 We do not only offer diving at The Oasis, but also excursions to the desert. Artefacts and ruins left by the ancient Egyptians and Romans can still be admired in Egypt today. Get enchanted by the magnificent colors of the Eastern Desert (not only during sunset) and discover ancient cities with us. Depending on the excursion, minibuses, jeeps or camels will be used. 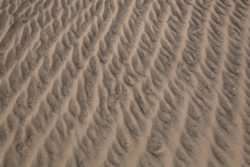 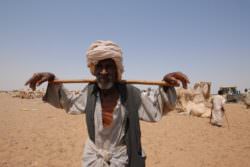 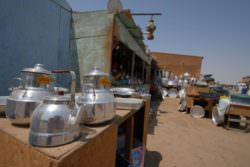 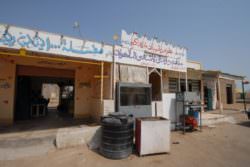 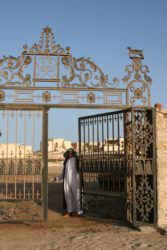 The following tours represent a selection from our excursion program

Sunset in the Desert

The tour starts in the afternoon with a drive through the desert (by jeep) to the camp where the camels are. The camel ride takes around about 30 minutes and you can enjoy the colors and formations of the dessert on the way.  The tour is continued by a drive (by jeep) to a Bedouin guesthouse called MADHAFA. There you will experience an unforgettable sunset in the desert. Bedouin coffee, tea and freshly baked bread are served.

This tour starts after dinner with a 30 minute drive (by jeep) through the nightly desert to the astronomy center. The center is located on a hill in the desert far away from any artificial light and the noise of the hotels. A powerful laser is used to accurately point out various stars and their constellations. The participants can observe planets and stars with binoculars and a powerful telescope. The guide will give you an understanding of the universe and the correlation between constellations and the Greek and Egyptian mythologies. During evenings when the moon is too bright to observe the stars, we offer a special “Moon Program”. The tour takes about three hours.

A combination of these two tours is complemented by a dinner in the desert. After sunset, a traditional dinner in the Bedouin guesthouse with grilled beef, fish, side orders and salads is served. After a coffee you set off for the Astro Tour.

Shalatin is located 260 km south of Marsa Alam and is an important trading center in this part of Egypt. We reach Shalatin after a 3.5 hours’ drive along the coastal road. At first, we visit the camel market. Sometimes there are 100 camels waiting for their new owners. After that, we can watch how the sold camels are loaded onto trucks in El Taba. You can see the purple “kalabeias” of the “Rashaid”, a wealthy tribe trading with camels, everywhere.

The Bishari and Ababda are ethnic groups from Sudan. Whips and curved daggers are worn as symbol of status. After a short drive you can visit another market. Stroll along the stalls – the range of items is truly impressive. You can see Egyptian women with their traditional headdress there. This is Africa!

After a typical Egyptian lunch, we drive along the coastal road back to the north. There are many occasions to make a short photo stop. (mangroves, rocky desert landscapes, etc.).

Daytrips to Luxor or Assuan

For both excursions, you drive from Marsa Alam across the desert into the Nile Valley.

The German speaking tour guide there will show you the following places of interest:

At first, you will be visiting three or four tombs in the Valley of the Kings at Thebes West. Next on the agenda is a visit of the Hatshepsut Temple from where you have a fantastic view over the Nile valley. After a photo stop at the Colossi of Memnon, it is possible to cross the Nile in a “felucca” and lunch will be served afterwards in a cozy Egyptian restaurant.

After lunch you will visit the Karnak temple. This is the largest and one of the most important temple complexes in Egypt. With this excursion, you can place yourself at the time of the ancient Egyptians 3000 years ago.

You will start by visiting the impoundment dam of Aswan. It dams up the Nile towards Sudan, creating the huge Lake Nasser. It is more than 3800 meters long and was officially opened in 1971. After that, a “felucca” will take you to the island of Agilkia to visit the Philae temple. This temple was originally built on the island of Philae, but it was flooded during the construction of the first impoundment dam in 1902. From 1977 to 1980, the temple was divided into blocks and rebuilt on the island of Agilkia. Back in Aswan, you will have lunch in a typical Egypt restaurant. Next on the agenda is a visit to the Nubian Museum. Afterwards you have the opportunity to take a walk on the esplanade before going back to the Red Sea.

Daytrip to Edfu and El Kab

On our way from Marsa Alam to the Nile Valley you visit the rock tombs of El Kab, also known as King Mina tombs. The beautifully colored relief drawings give us an idea of the lifestyle of the ancient Egyptians. In Edfu, you will visit the Temple of Horus which is the best preserved temple in Egypt. Its size of 137 meters in length and 79 meters in height is impressive. Horus means “the falcon”. The two statues at the main entrance symbolize the God Horus. Treat yourself afterwards to a typical Egyptian meal. Next on the agenda is a walk on the “Corniche” of Edfu. Alternatively, you can also take a coach ride across the market before driving back to the hotel.

In addition to these trips, we can arrange excursions to the ancient gold mines, the national park “Wadi el Gimal” or an individual visit of  Marsa Alam, Port Ghalib or El Quseir.

The minimum number of participants for all excursions is 2, and for some excursions more than 2 participants are required. Some tours are conducted by a local company and require different numbers of participants. There is no guarantee that all trips can be offered during your stay. This will depend on the political situation and on the granting of permissions by the local authorities.

Therefore, excursions can only be booked at the resort. Pre-booking is not possible.